On 31 March, our club had a social gathering with our friends from the Rotary Club of Kyalami for an evening of Swiss skittles – not the candy, but a version of 9-pin bowling – at the Swiss Club in Vorna Valley, Midrand. If you Google skittles, you’ll find many versions. There are two lanes and teams can have as many people as want to play, rotating through the team with 1 throw per person at a time. After each throw, the pins are reset in a manner resembling clumsily dancing marionettes. Each team tries to score such that every throw knocks down a number of pins corresponding to the numbers left on their scoreboard until there are no numbers left. For example, if you knock down 6 pins, you erase one of the number 6s on your board. There are two weights of bowling balls: heavy and heavier, and there is a thumb hole and one larger hole for the rest of your fingers. It’s actually easier to use a bowling ball with this configuration than the kind used with separate holes for each finger. You’ll notice in the photo that there’s a string suspended at the front of the lane and you must roll the ball under it, which keeps things on the slower side. Anyway, it was something different for this American in South Africa, and the game and camaraderie were a lot of fun. 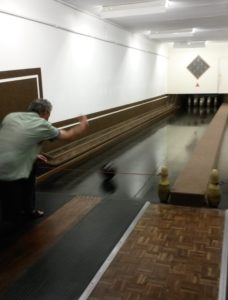 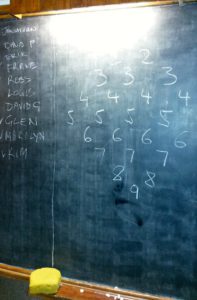